It's a big-small world with "8 degrees of separation" in Atlanta's entertainment industry. If you attend an event, screening or an award show you are bound to run into someone that knows someone else you've worked with on set. It's a good way to network and you can become familiar with the work that people do and the actors they have worked with as well. This was the process for me when I noticed Doris, she worked on a project with a fellow friend. I haven't had the chance to meet her personally yet but I wanted to support her. That was almost 4 years ago. It's so cool seeing her appearing on some of my favorite shows such as " Red Road, Chicago Med, The Rickey Smiley Show" and films like " 2 Guns, Snitch, Blackhats".

Doris is really interactive with her fans on her social media outlets. I was able to interact with her myself. Earlier this year I received an autographed picture from her after winning a little contest she put together. All you had to do was be the first person to post a picture of her guest starring on one of my favorite TV shows "Chicago Med"( I love all the Chicago spin-off shows - fyi). I even blushed at the lipstick print she left on the picture. I hope that I will be able to work with her. Although, I am blogging and producing other content...my personal film projects aren't far behind and I have 2 roles in mind for her.

Ms. Morgado’s ability to continuously work with such great directors is due in part to the training she’s received in some of the most prestigious acting schools in Los Angeles. Doris has trained at Warner Loughlin Studio, Diana Castle’s The Imagined Life and The BGB Studio. She has also trained at The Groundlings and in Scott Sedita’s Sitcom Acting Studio.

Doris’s talent and exotic look has also made her a favorite among directors in primetime TV with a recurring role on The Red Road and shows like Colony, Jane the Virgin, NCIS & NCIS: New Orleans. Her ability to channel both her strength and vulnerability has also made her a fan favorite in the film festival cirque with lead roles in multiple award winning films.

Fluent in both Spanish and English, Doris loves speaking to at risk youth in and around her community. When she’s not on set, you can find Ms. Morgado training hard at a local Bootcamp to help tone and lean out her body for her upcoming lead role in an action film. Doris is looking forward to working on the next Emmy Award Netflix series or in any feature opposite Vin Diesel--- - dorismorgado.com

Below is my Q&A with the alluring, down to earth, and tenacious Doris Morgado.

I was named after my mom's favorite aunt. Her name was Dorotea and luckily for me my mom thought that the name was a bit odd so she came up with Doris.

2. How did you get involved with acting? I got into acting back in middle school where I competed in a couple of monologue competitions. However, I didn't start my professional career until 2008 while living in Atlanta Georgia. 3. What or Who inspired you? No one in my family is an actor however I was inspired to pursue my dreams thanks to my mom who showed me that one must put in the work for what they love. 4. Why did you choose the career path of an Actress? Ever since I can remember I wanted to be an actress; although I didn't pursue it as a degree. I always felt empty whenever I was doing anything besides acting. I knew that this was a passion that I had to go after.

5. What were you doing before you started pursuing acting?

I got my bachelors degree in elementary education however, I was the office manager at my parents accounting firm in Miami Florida. 6. What has been the hardest part in pursuing your career in film/tv and does being a Latin woman play a part? The hardest part in pursuing a career in film and TV is getting out of your own way. It's so easy to doubt one self which can turn into a downward spiral. Trusting yourself and trusting your craft is so important but at times hard because this is an industry where you hear a lot of, "not now or no". I think me being Latina helps me in certain ways because we are strong and resilient. 7. What would you tell your younger self when it comes to where you are now in life? I would tell my younger self to not be so hard on me. Trust that I'm enough. 8. What do you want to be known for?

I want to be known for the passion and drive that I put into everything that I do. That tenaciousness of always getting back up, even if I'm bruised and bloodied. I always get back up.

9. What is you favorite genre of film/tv?

My favorite genre of film and TV is sci-fi thrillers with action.

10. What have been 3 key points in branding yourself?

Surrounding myself with a great team that see me where I am now and where I can be.

Trusting and believing that what I bring to the table is not only enough but worth sharing with the world.

11. What advice would you give aspiring actresses? The same advice I received from my first acting coach, Michael Cole, "If you are not on set, you need to be in acting class." For me, acting is a continued process of growth and development and our craft needs to be exercised.

12. What helps you get into character?

I have a great imagination so I use the given circumstances to build this life and bring it into reality in my mind and heart.

13. What do you do to relax after filming?

I'm a home body so I love to come home and curl up on the couch and watch a movie or cook.

14. What would be your ideal role to play?

My ideal role is in a sci-fi film where I not only get to show depth but also my physical attributes as I love action.

15. How was it seeing yourself for the first time on the small or big screen?

It was a surreal moment. I was very proud of myself but being a perfectionist and very goal oriented, I was already thinking of what I could do to get the next movie and a more challenging role. 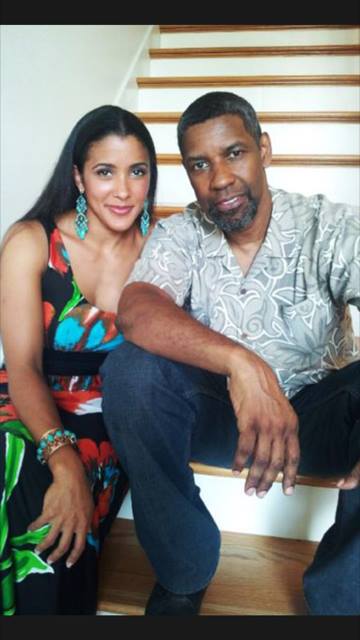